270 Belgians in the ranks of the Islamic State

The number of Belgians in the ranks of the Islamic State can be as high as 270. That’s the estimate I published yesterday in the newspaper ‘Het Laatste Nieuws’, showing two of the most recent recruits. 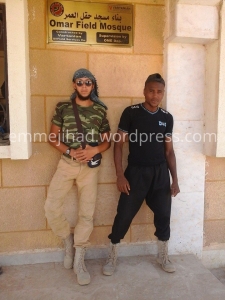 The estimate of 270 compatriots within the Islamic State is based upon the database of Belgian fighters in Syria that arabist Pieter Van Ostaeyen and I maintain using several open sources. It has to be stressed that the number is an extrapolation, since we do not know for sure the affiliation of all 385 entries already on our list.

We do have that information for 72 of the Belgian fighters, and identified 50 as members of IS. What means that in this sample, the share of the Islamic State amounts to almost 70 percent. Details about the others can be found at Pieter’s blog. The ratio can be different in the total figure of course, but seemingly there are no reasons to assume that difference is significant. So it’s fair to say that the Belgian presence within IS can amount to 270.

In the meantime, new images emerged of two Belgians who traveled to Syria last June to join IS. They already posted pictures on Facebook from halfway in Turkey, but these are the first that show them in Syria — more precisely Deir ez-Zor. The guy wearing sunglasses is Olivier Calebout (27), also known as Abu Sayfudeen, while the Dolce & Gabbana adept is Lucas Van Hessche (19), who was born in Haiti and adopted at young age by a Belgian couple.

Van Hessche was an amateur boxer who converted recently to islam. He and Calebout went to Syria with Abdelmalek Boutalliss (19) — alias Abu Nusaybah — a Belgian of Moroccan origin. Al three lived in the western city of Kortrijk, where Calebout reportedly was known by the police as a possible recruiter for jihad. The fathers of Boutalliss and Van Hessche traveled to Syria themselves already to bring their sons home, but apparently they failed.