Families of terror suspects often suffer from all kind of prejudice. It is thought that they are covering for their relatives, that they have contributed to the radicalization themselves, or that they quietly are proud. Sometimes that is true — but it seems rather rare, according to research published in the Belgian newspaper ‘Het Laatste Nieuws’. We examined how people landed on the Belgian list of foreign fighters and recruiters — and found that on a total number of 450 cases where authorities acted on external tip-offs, family members who raised the alarm were the most important factor. 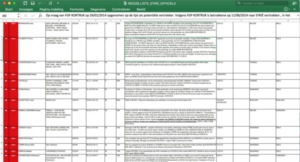 Screenshot from the official list of Belgian foreign fighters and recruiters we’ve obtained. Details are made illegible for privacy and security reasons

OF 450 TERROR SUSPECTS LISTED IN BELGIUM AFTER AN EXTERNAL TIP-OFF:

• 26% WERE DENOUNCED BY RELATIVES

At least 117 names were put on the official Belgian list of suspected foreign fighters and recruiters after relatives spoke out. Sometimes they confirmed suspicions that authorities already had, but often they alerted the police spontaneously out of fear for the departure of their relative to the Syrian-Iraqi conflict zone. We found 60 cases indeed of which security services wouldn’t have known (or would have known much later, at least) without cooperation from within the suspect’s family.

Marion van San, a criminologist who has talked with many families for her research into the motives of foreign fighters and the attitude of relatives, is not surprised at these figures. “Until now, I have never visited a family that was happy with the departure of a relative”, she says. “We should remain cautious when drawing conclusions, since relatives who are radicalized themselves are not willing to talk — and if a quarter of those families alerted the authorities, there are still three quarters who did not. But I also have to say that families often only realize what was going on after a relative has departed. It is almost unbelievable how they didn’t see the signs.

It has to be feared, according to van San, that the willingness to report a relative for radicalization has diminished over the years. “Because it didn’t help the families who did”, she says. “The police rarely acted adequate. They either told that whoever wanted to leave, could not be stopped — or they talked immediately about making an arrest.” In van San’s experience, radicalization often happens within families with rather too little than too much religion — raising their children as Muslims without really making an issue of it. “I wish that I had taught my son much more about Islam”, a father told van San. “So that he would have known enough to fend off these people with their wrong ideas.”

They do exist of course, families where children are raised as extremists — and where a departure for the jihad is a reason for joy. But in our research, we could only find a dozen examples of that. The list contains a Belgian citizen of Chechen descent, A.T. (21), about whom is stated that he radicalized “under the influence of his father”, while his mother’s family “seemed willing to facilitate his travel to Syria”. The parents of T.T. (21) were divided, since “he was encouraged by his father to get a military training as a preparation for jihad”, while his mother “took away his passport” to be sure he couldn’t leave. There is also an occasion in which a father was put on the list as a suspected recruiter while his son — an important member of Shariah4Belgium — had died in Syria.

• 25% WERE FLAGGED BY FOREIGN AUTHORITIES

For 112 suspects, the crucial information came from abroad. Most often from authorities in Turkey, where many would-be foreign fighters were stopped and sent back to Belgium. Morocco is another country sometimes more aware about the radicalization of Belgian residents than Belgian authorities themselves. While the latter were still struggling with vague indications about the Brussels-based Italian citizen Silvio Terranova (25), Rabat suspected him already of a terrorist plot against its royal family. It was on Moroccan soil that Terranova finally could be arrested and convicted to three years in jail. About the Belgian citizen of Serbian descent V.S. (30) it were Iraqi security services who raised the alarm. He was arrested in Iraq in 2014, while even his family seemed unaware of his conversion to Islam, and turned out to be a youth friend of a Belgian foreign fighter who had died in the Syrian conflict already.

• 13% GAVE AWAY TOO MUCH ON SOCIAL MEDIA

60 individuals are on the list after exposing themselves on social media. M.N. (20) from Brussels for instance, who tweeted three years ago that he would leave for Syria once he was eightteen years old. He named his account ‘Killer2chiites’, a clear indication of his will to commit atrocities there. T.D. (28), a convert to Islam from the Campine region, exposed his plans to travel to Syria on his Facebook account. There, he publicly asked to get in touch with someone speaking Turkish in order to communicate with a facilitator in Turkey. A.K. (54) from Brussels wasn’t known to Belgian security services until he posted a picture showing himself in military fatigues and carrying a kalashnikov rifle on his Facebook account — a picture that clearly was taken in Syria.

• 5% WERE EXPOSED BY PUBLIC SOURCES

21 names were put on the list after being exposed by public sources, such as mainstream media. “Residing in Syria according to Het Laatste Nieuws”, it is mentioned about Johan Castillo Boens (38), the son of a professor at Leuven University. Apparently, security services didn’t know about his departure when we revealed his whereabouts in October 2014. Boens had been captured by Turkish authorities while trying to sneak into Syria, but subsequently became a part of the infamous prisoner swap in which tens of Islamic State adepts were traded for Turkish diplomats taken hostage by the terrorist organization. Sometimes, public sources are the work of jihadists themselves. In the case of Arben Imishti (38) from Schoten near Antwerp, it was his appearance as an executioner in an Islamic State beheading video that confirmed his presence in Syria.

• 4% SPILLED THE BEANS THEMSELVES

18 people have to blame themselves for being on the list because they talked too much. Often, it happened in a fury unrelated to their extremist beliefs. Samir Chafik (45) from Charleroi shouted that he would leave for Syria and return to kill the “Belgian disbelievers” during a brawl in his Thai boxing club. He was arrested the following month, appeared to be linked with a man from Charleroi who had committed a suicide attack in Iraq, and he was sentenced to five years in jail. M.C. (65) from Huy went asking the police whether her criminal record would prevent her from obtaining a visa for Syria — and M.G. (31), an imprisoned Tunisian citizen, revealed his plan to wage jihad in “a rancorous letter” to the Belgian king Philippe.

• 2% WERE DETECTED AT SCHOOLS

Seven times at least it was from within a school that the alarm was raised. In the case of I.H. (20) from Brussels, that happened 3,5 years ago after he had glorified Islamic State in a student class paper. Z.A. (23) from the eastern province of Limburg was caught during lessons while searching the internet for weapons — and S.A. (27) was denounced by fellow university students suspecting that he had left for Syria because of his absence and previous signs of radicalization on his Facebook page.

• 1% REPORTED BY EMPLOYERS OR CO-WORKERS

Three people on the list were detected at their workplace. In the case of R.B. (30) from Brussels, it was virtually impossible to overlook his radicalism. He distributed Islamic State propaganda material among his co-workers, openly told that he wanted to leave or commit an attack at home, and reportedly uttered death threats against superiors who tried to stop his proselytism. Two of the individuals were working for companies at Brussels Airport — and luggage handler A.H. (41) even asked his colleagues for money in order to support the “struggle of Islamic State”.

We based our research on a list of 811 suspected foreign terrorist fighters, people willing to leave for jihad, and recruiters — compiled by the Belgian federal government’s Coordination Unit for Threat Analysis (CUTA, also known as OCAD in Dutch and OCAM in French). Since the allegations often haven’t been proven in court, we don’t mention full identities unless an individual was publicly named and/or convicted already for a terrorist offense. It is crucial to add that a single allegation like the ones we mention, never was enough to be put on the list. That happened only after further investigations resulted in additional evidence. Finally, it has to be stressed that the percentages do not refer to the total number of suspects, but only to the 450 cases for which the list explicitly mentions an external tip-off as first indication or decisive confirmation of the suspected radicalism.

The latest story of a Belgian citizen trying to join the Islamic State, seems to reveal a controversial swap by the Turkish government. According to a list that is widely circulating now, the Belgian was caught on his way to Syria. But Turkey exchanged him with IS as part of the deal about the Turkish hostages that recently were set free.

Johan Castillo Boens (35) isn’t the average Belgian fighter within IS. He is the son of a retired professor at the chemistry department of Leuven University, whose wife comes from the Philippines. They raised their son as a christian, but Johan converted to islam several years ago after some serious personal troubles. Nowadays, he is married with a woman from the Philippines himself. They have five children, of which the youngest one was born in June of this year. His wife was also a christian, but has followed him into islam.

According to his mother, Johan didn’t manage to find a decent job, although he has studied business management and took additional courses in IT. “Because he is half Philippino, he looks a bit like a foreigner”, she is quoted today in the Belgian newspaper ‘Het Laatste Nieuws’. “And letting his beard grow, made things only worse. We often tried to convince him to shave off that beard. It isn’t necessary that everyone can see you’re a muslim, we told. But he didn’t want to listen. Recently, he spoke about moving to Jordania and in August he left to search there for a job.”

At least, that was what he told. Two separate sources informed us this week that Johan went to Turkey instead, trying to join the Islamic State in Syria. According to the first source, his name is on a list of several European IS supporters that were recently caught by the Turkish police. The second told us that he was in Turkey indeed about fortnight ago, but since has crossed the Syrian border. Caught or gone to Syria? That seems to be a contradiction. But both sources say they have indications that Johan was part of a shadowy deal.

At least one other man — a Briton, we are told — was mentioned on the same list, but has joined IS in Syria now. It is thought that Turkey has handed them over to IS as a part of the exchange that has set 49 Turkish hostages free, including the staff of the Turkish consulate in Mosul. According to the Turkish press, there has been such a swap indeed. But until now, it was thought Turkey only persuaded the Syrian resistance movement Liwa al-Tawheed to hand over some of their IS detainees, but didn’t release anyone itself. The fate of Johan Castillo Boens possibly can prove otherwise. If he really is in Syria now after being detained by the Turkish authorities, Ankara will have to explain a few things.