Two Belgian brothers of Chechen origin currently fighting in Syria are planning to come home and murder the recruiters who bring minors to war. “We will chop off their heads”, they promised their father — according to a nephew in Belgium.

Arbi and Imran are two brothers of Chechen origin who were living in Belgium before they went to Syria. Apparently they got some kind of military training in Chechnya, since their nephew posted a picture on his Facebook of them with other fighters, wearing camouflage suits in a snowy forest landscape. According to the nephew, the picture was taken several months before they started their jihad.

In Syria, they joined the militia of Sayfullakh Shishani, a Chechen commander who pledged allegiance to Jabhat Al-Nusra, the official branch of Al Qaeda in Syria. “Emir Sayfullakh was martyred by a stray bullet or shrapnel after retreating during the storming of Aleppo Central Prison earlier this month”, the nephew reported on his Facebook page. “Now the militia is led by a Chechen native named Mohammed Khorasani.”

The nephew is living near the Belgian city of Ghent and studying at the Karel De Grote Hogeschool in Antwerp. He started talking about the plans of the brothers after their father was arrested last week during a week long police operation against Syria recruiters in Belgium, mainly in the capital Brussels.

“My uncle is completely innocent”, he states. “The kafir will pay a high price for this injustice. We Chechens do not need to be recruited. If we can, we decide to go to Syria ourselves. And my nephews have promised their father to chop off the heads of those who are recruiting people under twenty years old. They wouldn’t say so if their father was one of them.”

“They saw quite a few of 16, 17 and 18 years old Belgian and Dutch shaheed die in front of their eyes. And they will avenge them, especially the Afghan, Turkish and Moroccan recruiters will see their heads separated from the rest of their bodies sooner than they can ever imagine — that is what they promised their father. Youngsters should not be brainwashed to go and fight there as they are not mature enough to understand the brutality of their enemies.”

Arbi and Imran asked their commander permission to leave the Syrian front for a few months in order to visit their father in jail. “He agreed, and my nephews will travel home through Turkey at the end of March”, it sounds. “May they keep their sacred Chechen word, Inch’Allah. In Syria, they already demonstrated the courage of the Chechen people by catching two Hizbullah fighters and killing one of them who tried to escape.”

At this point, we do not know the full identity of Arbi and Imran. But some cross-posting of messages and images on a number of related Facebook accounts seems to learn that the Belgian Syria fighter ‘Tchetchen Noxchi’ must be one of them. With all due reserve, we do publish two of the pictures certainly showing jihadi’s in Syria — and possibly both Arbi and Imran. 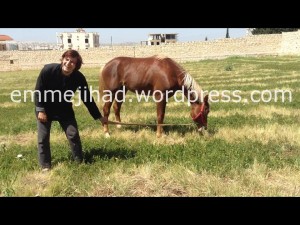